L-IRL is an acronym for Lola - Industrial Robot Language. L-IRL is a structured type language and belongs to the class of problem-oriented languages. It contains commands for robot motion programming and commands for programming the logical flow of the program. L-IRL enables operations with variables, arithmetic, logical and geometrical expressions, as well as operations with signals from the environment.

L-IRL is designed to be useful in industrial environments. It is adapted to solve the problems of the robot operations programming, which may include the operation of one robot with additional sensors, but cooperative work of several robots and other devices as well.

Structure of the L-IRL language corresponds to the PASCAL programming language with certain modifications. IRL (DIN 66312) standard is used as a model to achieve modularity and to implement robot specific programming structures.

L-IRL contains commands for synchronization of events in the environment, as well as commands for program flow control, function and procedure calls, loops and commands for robot motion tasks. Data types can be simple, structured or geometric. Describing of robot positions and other objects is provided by using geometrical data types and geometrical arrays. Geometric operators enable addition and subtraction of vectors, relative translation and rotation of coordinate systems and so on. Motion statements (MOVE and MOVE_INC) enable programming of robot trajectory in based coordinate system (MOVE) and in tool coordinate system (MOVE_INC). Robot trajectories can be point to point (PTP) and motions by mathematically defined trajectories (CP). Mathematically defined trajectories are lines and circles in space and parabola at smoothing trajectory of CP motion. It is also possible to set a speed smoothing of the robot. Variables called signals are used for communication with the environment, while logical channels are used for communication with sensors. Human centrifuge programming in an open loop mode can be performed with GMOVE commands. 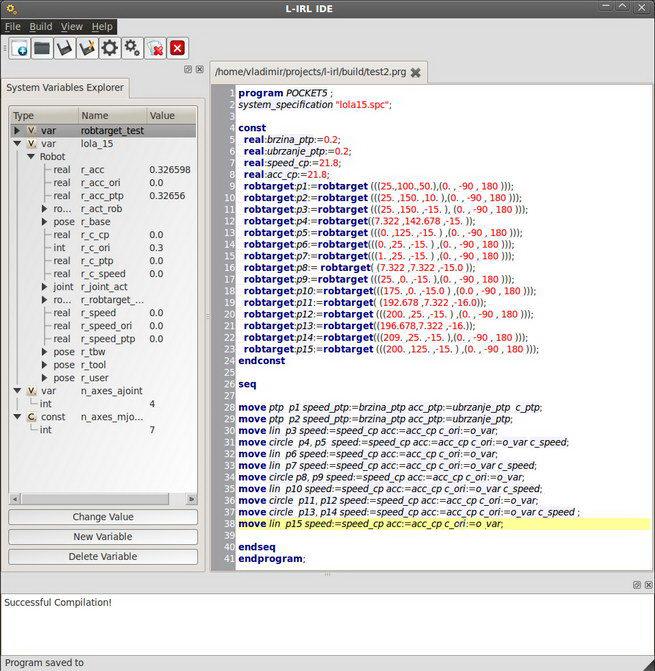