Modern thrust-vectored jet aircraft have the capability of developing multi-axis accelerations, especially during the performance of "super-manoeuvres". 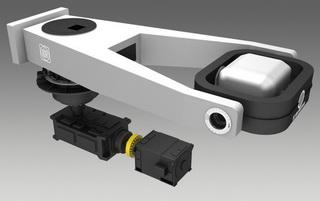 These "agile" aircraft are capable of unconventional flight with high angles of attack, high agile motions with thrust-vectored propulsion in all 3 aircraft axes, rotations around those axes and accelerations of up to 9 g (Earth’s acceleration), with acceleration rates (jerk) of up to 9 g/s. 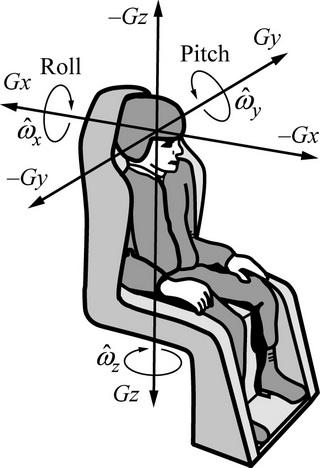 Hence, the destructive effects of the high acceleration forces and the rapid changes of these forces on the pilot’s physiology and the ability to perform tasks under these flight conditions must be tested. A human centrifuge is used for the reliable generation of high G onset rates and high levels of sustained G, to test the reactions and the tolerances of the pilots.

is the magnitude of acceleration acting on the pilot, an is normal, and at is the tangential acceleration.

The centrifuge has the form of a three degree-of-freedom (3DoF) manipulator with rotational axes, where the pilot’s head (or chest for some of the training) is considered to be the end-effector. The arm rotation around the vertical (planetary) axis is the main motion that achieves the desired acceleration force. Centrifuge flight simulators must achieve velocity, acceleration and jerk of the pilot through suitable rotations of the centrifuge arm about this axis. The arm carries a gimballed gondola system, with two rotational axes providing pitch and roll capabilities. 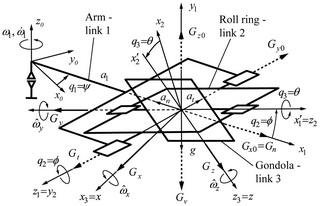 The yaw axis (z) is parallel with the arm axis. The roll axis lies in the plane of the arm rotation, perpendicular to the main rotational axis, i.e., in the x-axis direction. The pitch (y ) axis is perpendicular to the roll axis.The task of the roll and pitch axes is to direct the acceleration force into the desired direction. It is considered that the pilot’s head (chest) is placed in the intersection of the gondola’s roll and pitch axes.

Although the centrifuge is capable of generating acceleration forces of up to 15 g for materials testing purposes, forces that are less than or equal to 9 g are used for pilot training. 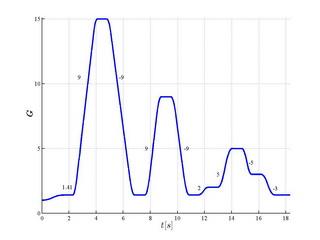 The modern combat aircrafts can have very unusual orientations. The pilot’s ability to recognise these orientations has to be examined. A spatial disorientation trainer is used for pilot adaptation on these unusual poses and for persuading pilot to believe to aircraft equipment and not to his sense. It is designed as 4DoF manipulator with rotational axes. 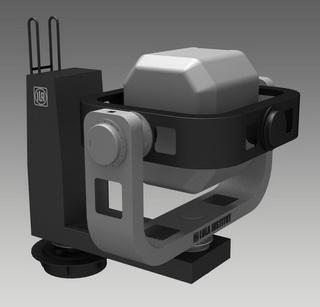 Through rotations about these axes different orientations can be achieved. Apart from that, different acceleration forces acting on aircraft pilot can be simulated. 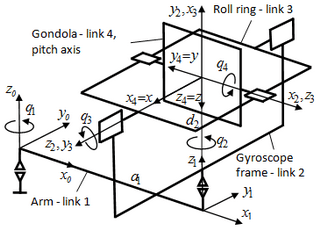 The pilot’s head (or chest) is considered here as the end-effector. Arm rotation around vertical (planetary) axis is the main motion. The arm carries a gyroscope gondola system, with three rotational axes providing yaw, pitch and roll capabilities. The yaw axis (z) is parallel with the arm axis. The roll axis lies in the plane of the arm rotation, perpendicular to the main rotational axis i.e. in the x-axis direction. The pitch (y) axis is perpendicular to the roll axis. 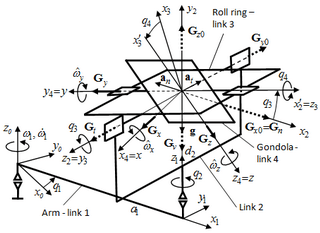